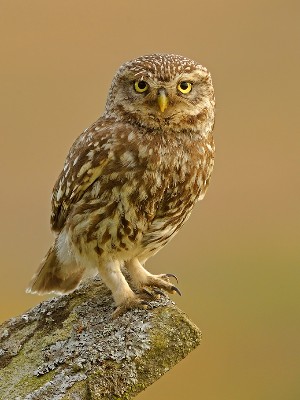 Adults are 22cm tall with a 56cm wingspan. Male and females look similar. They have a stocky silhouette due to their broad, round head and body, and short tail. Main plumage colour is chocolate-brown with olive-brown tinge. Adults have cream-buff streaks and spots on their back, flight feathers, breast and head. Tarsus are cream-buff and their talons are brown. They have lemon-yellow iris and pale plumage around their eyes, giving their characteristic frowning expression. Its flight is a series of fast wing beats and looping glides. Vocalizations include their shrill ‘goooek, goooek’ and ‘kweew, kweew’ calls. 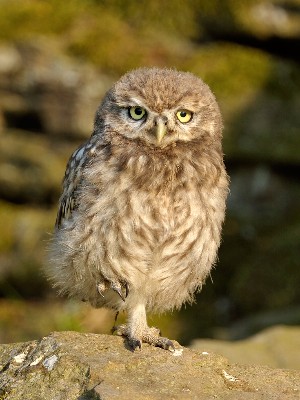 Juvenile markings and colourings are similar to the adults but their feathers are softer, shorter and paler. Their iris colour is pale yellow-grey; this turns to lemon-yellow at three months old. Juveniles start to fledge from June onwards and remain close to their natal site until autumn. Listen out for their begging call from June to August; they make a repetitive, raspy ‘psiep, psiep’ sounding call.

Where to see Little Owls

Little Owls are resident birds and can be seen throughout the year. They're found in England and Wales with a few pairs in Southern Scotland. There's an estimated 5,600 pairs in the UK; they're more abundant in East Anglia, the Midlands and North West England. Little Owls live in a variety of habitats including lowland farmland, orchards, parkland, rural villages and quarries. Little Owl territories are made up of a patchwork of grassland, hedgerows, fences, tree lines, scrub and barns. They hunt in these habitats and their diet includes earthworms, beetles, moths, spiders, small mammals and birds. Little Owls are often perched on fence posts, branches, barns, telegraph poles, tree pollards and chimney stacks.

You are more likely to see and hear Little Owls at dawn and dusk. They enjoy sunbathing and can often be seen in daylight hours. Little Owls can hunt in daylight and at night.