The Little Owl in the UK

Most of the UK's Little Owls are thought to originate from successful introductions during the late 19th century. However, there are Little Owl sightings and fossil records which pre-date the first documented release of this owl in 1843. Two Little Owls were spotted in London in 1758; both were assumed to be escapees from private collections. In 1808, there was a further reliable record in Devon and two more in Cumbria in 1811. Other records were thought to be errors.

In 1842, Charles Waterton acquired five Little Owls from Rome and released them in Walton Park, West Yorkshire in 1843. He wanted to introduce the Little Owl as a predator of his garden pests; there was no evidence that these owls bred. Later in 1843, a Little Owl was captured alive in Derby and another was shot in Fletching, East Sussex. William Borrer, a naturalist, concluded that the Derby owl must have ‘wandered’ 80 km from Walton to Derby. He didn't believe that the owl at Fletching was imported, but he had no proof that it had flown across the Channel. 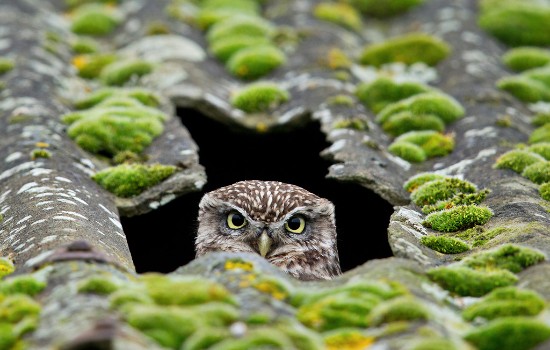 The first successful Little Owl introduction was by Edmund Meade-Waldo in Stonewall Park, Kent - he released 40 owls between 1874 and 1880. A pair first bred here in 1879. A second successful Little Owl introduction was carried out by Lord Lilford, near Oundle in Northamptonshire during the 1880s. A pair first bred here in 1889. Little Owls are thought to have rapidly colonised England from both release sites. This was aided by further releases. By 1940, the Little Owl had colonised much of England and Wales. A breeding pair was recorded in southeast Scotland in 1958; less than 50 pairs colonised Scotland.

Initially, the Little Owl was welcomed in the UK. However, during the early 20th century, game rearers had unfounded concerns that the Little owl could be taking large numbers of their pheasant and partridge poults. An extensive Little Owl Food Enquiry was conducted by Alice Hibbert-Ware in 1936 and 1937; Alice concluded that Little Owls mainly took invertebrates and small mammals. They very rarely took young game birds. Little Owls were removed from offshore islands as there were concerns that they were predating Manx Shearwater and Storm Petrels at their breeding colonies in Pembrokeshire. Otherwise, they appear to have filled a vacant niche in the UK.

The Little Owl is classified as a naturalised introduced breeder in the UK. Some naturalists recognise the Little Owl as a reintroduced breeder due to their presence in fossil records. Overall, it is now widely accepted as part of UK biodiversity. It is largely restricted to England and the Welsh borders with isolated populations in west Wales. The Little Owl is most abundant within East Anglia, the Midlands and central northern England. You can find out more about where to see Little Owls via our Spotter's Guide.

The UK’s Little Owl population is in rapid decline. Data generated from British Trust for Ornithology bird surveys indicate that the Little Owl has declined by 65% over a 25 year period; this decline has accelerated since 2002. There has been an 11% contraction in its UK range since Bird Atlas 1968-72; latest Bird Atlas maps highlight further losses in this owl's breeding range in south-west England and Wales. It's current UK population size is an estimated 5,700 breeding pairs ‒ we need a new national Little Owl survey. The Little Owl has declined in mainland Europe and is listed as a Species of European Conservation Concern.