We’re massively excited and proud to have been chosen by @YOLOBirder as a recipient of monies raised from the charity auction of #99Birds - a one-off collection of stunning one-of-a-kind artworks by 99 artists. It’s brilliant that so many people love Little Owls. Sadly, this quirky and characterful owl is rapidly declining and its non-native status means that conservation and research projects on it are rarely funded. Any monies raised will really help.

We’re extremely grateful to @YOLOBirder - curator of #99Birds, the 99 contributing artists, @MattParsons63 for binding #99Birds, and to all who have bid on and promoted this masterpiece, which featured on Springwatch! You can learn more about the incredible #99Birds below. And you can view (and bid) on #99Birds HERE. This is a once in a lifetime opportunity! #99Birds is a highly prized, collectable one-off artbook! Spread the word!

You can view all the artwork in #99Birds HERE. 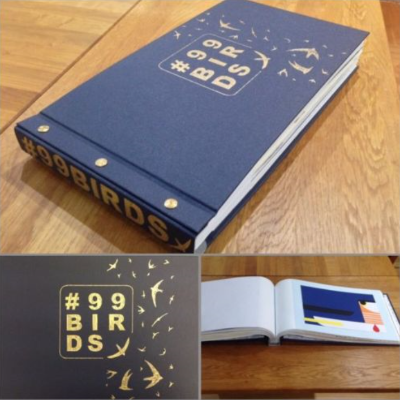 •  “It’s a thing of enormous beauty. Get ready to bid" - Chris Packham.

It started with a single tweet: an idea to address the alarming decline in the UK’s bird population. The result is #99Birds; a single unique hardbacked collection of 99 artworks from a diverse collective of the nation’s most high profile bird enthusiasts to raise money for conservation charities. In this post-Brexit climate UK conservation is truly at a crisis point. Without the protection of several current EU legislations our wildlife, and its habitats, are under severe threat. It was against this backdrop that @YOLOBirder, an infamous Twitter conservationist (who has already raised thousands of pounds for UK wildlife projects), suggested to his thousands of followers an idea to raise funds for bird conservation. He would collate the first 99 pieces of bird art to arrive through his door into a one-off book for auction.The response to his single tweet was remarkable and once a few well-known bird enthusiasts and artists agreed to take part the project was officially launched.

The resultant #99Birds is truly a one-of-a-kind collection: 99 original, signed artworks in a single post-bound book. The cover is hand-tooled in gold over a navy blue ‘buckram’ library book cloth. A luxurious hardback album. Included in the final book are commercial bird artists, illustrators, published writers, children’s book authors, celebrities, musicians, award-winning photographers, paper engineers - from TV presenter Chris Packham to Fyfe Dangerfield from indie band Guillemots - and many more. This gives the book a very broad range of styles from traditional to comic art covering a variety of media types including collage, paint, pen and ink, pencil and the occasional hand lino print. The auction will be supported by a huge online campaign to raise further money leading up to the book auction in May, timed to coincide with the airing of the BBC Springwatch series.

YOLOBirder states “Environment Secretary Andrea Leadsom admits that once Article 50 is triggered only two thirds of current EU environmental directives will remain, while the Government continues to remove backing for green energy projects. So, it really is up to us to come together to protect our wildlife or this book may become a record of the British wildlife we lost for future generations."

Monies raised will be split between the British Trust For Ornithology and the UK Little Owl Project.

Melissa Harrison - Author, critic, nature column writer for the Sunday Times and series editor of four anthologies of writing about the seasons published in 2016.

Matt Sewell - Author of ‘Our Garden Birds’, ‘Our Songbirds’, ‘Our Woodland Birds’, ‘Owls’ and ‘Penguins’ for Ebury Books.

Will Rose - Animator, illustrator and wildlife fan based in London. He has worked as an animator on ‘Peppa Pig’, ‘Ben and Holly’s Little Kingdom’ and ‘Hey Duggee’ for CBeebies. Illustrator for new Cbeebies David Attenborough app.

Ray Scally - Illustrator with work published across a wide variety of magazines and books, most recently collaborating with Martin Garner on the Birding Frontiers Challenge series.

Andrew Mackay - Artist and illustrator of many books including the Birds of the Western Palearctic (Concise Edition), RSPB Birds of Britain & Europe and the Dorling Kindersley ‘Pocket Nature’ series.

Jo Brown - South Devon based freelance illustrator. Working primarily in pen and ink, her work is heavily influenced by the natural world.